Participating in A Clinical Trials for COPD Might Be Able to Help You!

Chronic Obstructive Pulmonary Disease (COPD) is a chronic inflammatory lung disease that causes obturated airflow. COPD is a progressive disease that affects middle-aged and older adults presenting with a history of smoking. COPD can be fatal. However, opting for the right treatment can help manage its symptoms.

If you are struggling with managing the symptoms of COPD, Revival Research Institute may be able to help you with its COPD Clinical Trials.

You may be eligible to participate in the COPD Research study if you:

We are trying to assess how well the investigational treatments for COPD may be able to help with this symptomatic condition. 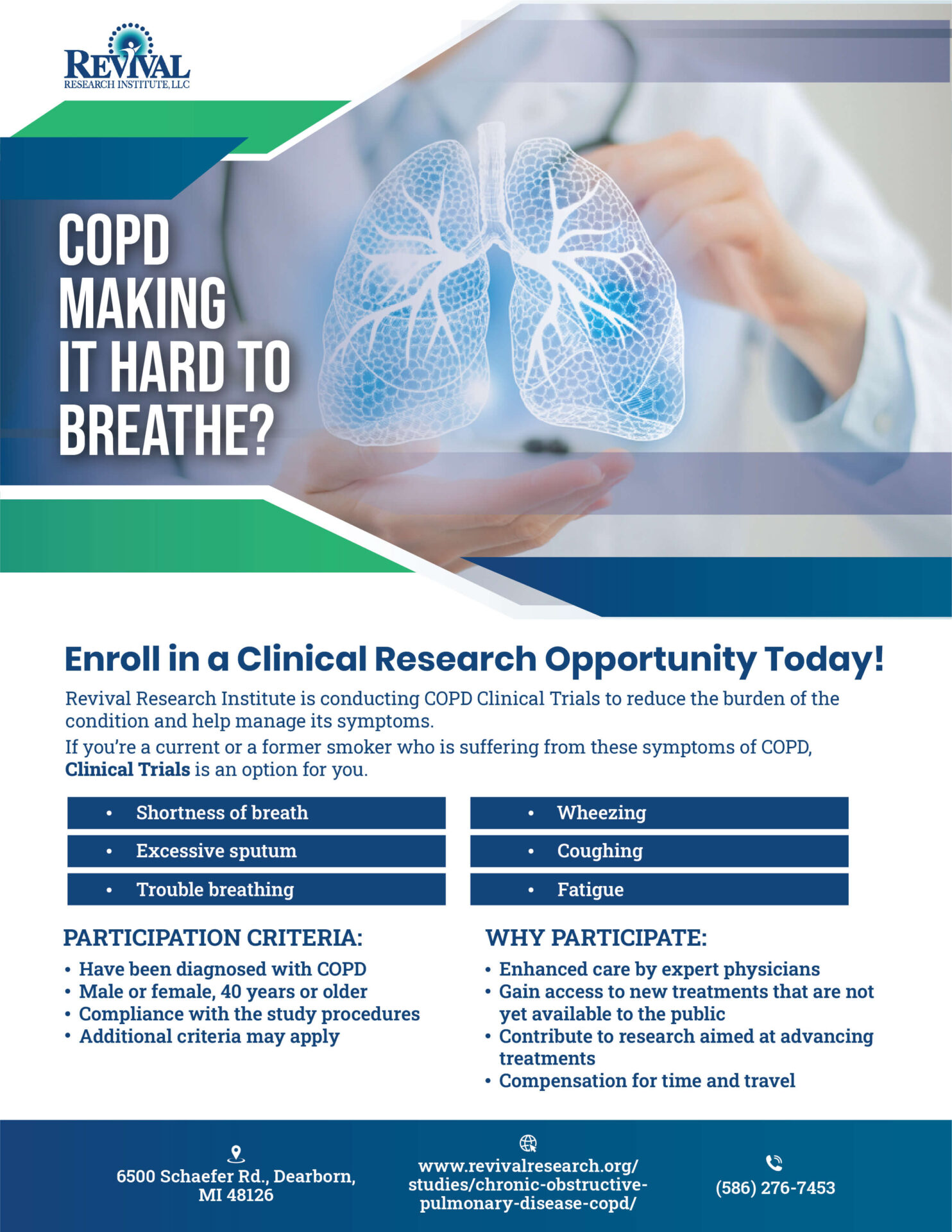 The purpose of conducting the COPD Clinical Trials is to evaluate the safety and efficacy of a novel investigational medication to help people suffering from this condition. Participants will be provided study-related care at no cost.

Am I Eligible to Participate?

In order to qualify to participate in the study, the following criteria need to be met:

Subsequently, participants will be asked to visit the study site for the screening process, once the criteria have been met. The screening process is a detailed procedure covering all the crucial information, including the recording of the participant’s medical history. Moreover, the participants are informed in detail regarding the study and are required to sign a consent form. An Informed Consent Form is a document detailing all the necessary information regarding the procedure. Consequently, the research study begins as soon as the participant understands and signs the form.

*Volunteers who are eligible for the study will receive all study-related care from experienced healthcare professionals including doctors and nurses, at no cost to them or their insurance.

Get Started: What to Expect?

Revival Research Institute is conducting a COPD research study to gauge the safety and efficacy of an investigational medication that may help with your symptoms of COPD. If you believe you are eligible for the clinical trials and have exhausted all other treatment options that don’t seem to work, fill out the form above. Someone from our medical staff will call you and see if you qualify for the study.

To further confirm your eligibility and complete the screening process, you will be invited to our nearest site for a visit. One of the medical staff members will ask you to sign the Informed Consent Form. Before signing the form, the study doctor will clearly explain to you everything about the study, the risks and benefits of the treatment, details about the study visits, and everything that may be expected of you. During the Informed Consent Process, we encourage each of the participants to ask as many questions as they’d like. We highly suggest signing the Informed Consent Form once you are satisfied with all the information. 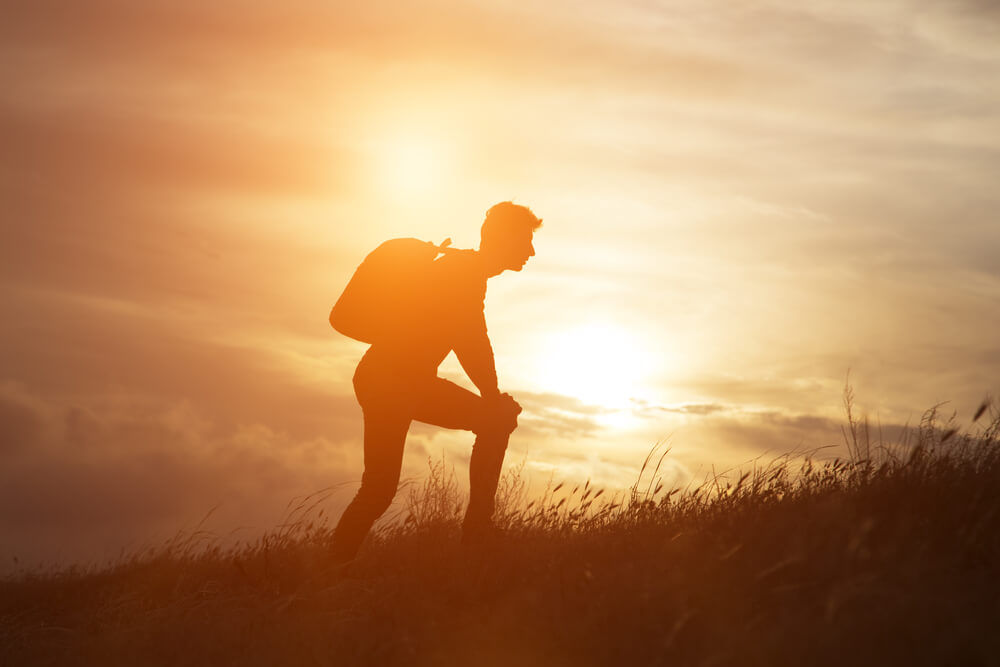 Chronic Obstructive Pulmonary Disease (COPD) is a progressive inflammatory lung disease that blocks the airways in the lungs making it difficult to breathe. Long-term exposure to certain irritants like air pollution, chemicals, exposure to fumes from burning fuel for cooking and heating in poorly ventilated homes can cause damage to the lungs. One most common triggering factor is cigarette smoking.

Even though it is rare, researchers believe that genetics play an important role in the etiology of COPD. A lack of a protein called Alpha 1 antitrypsin can put one at risk of developing COPD.

Age is another triggering factor amongst people suffering from this condition. Most people in their 40s are usually the ones who develop symptoms of COPD.

There is no significant symptom in the first instance but as the condition worsens, there are some noticeable symptoms such as

Individuals are likely to encounter exacerbations, during which the symptoms worsen. This persists for a longer period of time.

COPD: Superset of Chronic Bronchitis & Emphysema
COPD is a superset of two different conditions i.e Chronic bronchitis and Emphysema. These two conditions usually appear together but differ in their severity.

Chronic bronchitis is an inflammation of the lining of the bronchus. The bronchial tubes are responsible for delivering air to and from the air sacs. Hair-like strands called cilia line your bronchial cylinders and assist in moving mucus out. Whenever you have bronchitis, you lose your cilia. This makes airways harder to dispose of the mucus, causing excessive coughing and again more mucus production.

Emphysema is caused by damage to alveoli (air sacs). This destruction of the walls causes them to merge and form a giant air sac. Less oxygen is absorbed and delivered to the blood. Damaged alveoli cause the lungs to lose their flexibility and eventually leading to difficulty in breathing.

COPD is a chronic inflammatory lung disease that affects the airway. The airways get blocked because of exposure to air pollutants, passive smoking, and genetic factors. As a result of which it gets harder to breathe.

Will I have to pay for the research study?

No, participation is completely free of cost to you and your health insurance. Instead, as a participant, you will be monetarily compensated for your time and travel.

What is the purpose of COPD research study?

The sole purpose of conducting a COPD study is to assess the efficacy and safety of the investigational medication that may be able to help advance medicine and help doctors understand the condition and potential treatment options. We aim to make novel treatment options accessible through clinical trials that may be able to help you and countless others.

How long does a COPD exacerbation last?

There’s no cost for participating in our eczema study as we cover all the expenses ourselves including travel and participation cost.

What are the stages of COPD?

There are four phases of Chronic Obstructive Pulmonary Disease. Mild, Moderate, Severe, and Very Severe.
Your Physician will decide which stage you fall under by carrying out some breathing tests including Spirometry. This method decides your lung efficacy by estimating how much air can be taken in and taken out.

We are dedicated to advancing medicine & redefining patient care, one clinical trial at a time — with compassion. We are a network of clinical trial sites based in Michigan, & Texas.

Please give us a call or send us a message! We would love to hear from you. We will respond to your inquiries as soon as we can.